Maize is the main staple food of over 85 per cent of the population in Kenya. The per capital consumption ranges between 98 to 100 kilograms which translates to at least 2700 thousand metric tonnes Annualy. Atleast 38 per cent of the food crop producers in Kenya grow Maize

Maize is a tall annual crop of the grass family. It grows to a height of between 1.5 m and 3 m. From the stalk grows the conical cob on which the grains are found. The cobs are harvested either by hand or by mechanized harvesters such as in the USA’s extensive farms. The grains from the cobs are consumed or milled for maize flour.

Maize was ﬁrst cultivated in America by the Indians. It was taken to Europe by Christopher Columbus. It has since spread to many parts of Africa and Asia. In Kenya, it was ﬁrst introduced by the Portuguese at the coast in the 15th Century.

Since maize is adaptable to a whole range of climate conditions, it is the single most extensively grown crop. However, the chief growing areas are Trans Nzoia, Nakuru, Bungoma, and Uasin Gishu counties. 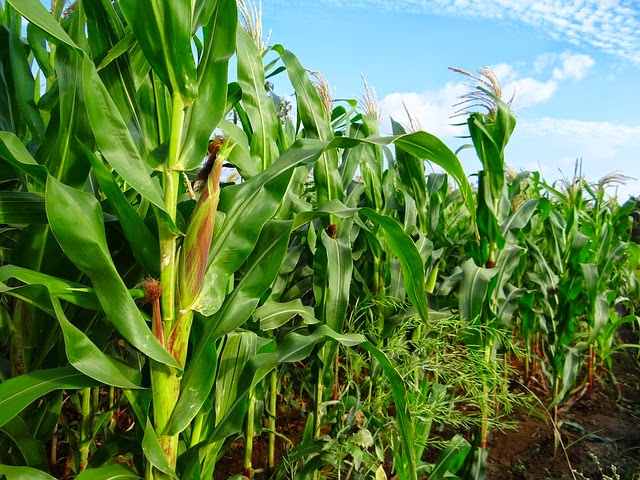 In South Nyanza, other parts of the Rift Valley and Western Province, maize is grown alongside other subsistence crops like beans, potatoes, and bananas. Good yields are obtained with the use of hybrid seeds supplied by Kenya Seed Company. The Kenya Agricultural Research Station has developed a special kind of hybrid maize called Katumani, which is adapted to the drier conditions and is grown in Machakos, Kitui, Tana River and Isiolo counties.

Warm temperatures above 15°C. These are experienced in most parts of the country.

High rainfall of 1,200 mm -2,500 mm. However, maize ﬂourishes under different rainfall regions and at times tolerate rainfall totals between 635 mm to 1,145 mm or even adapt to semi-arid regions with rainfall totals of below 380 mm.

Rich, well-drained light loam soil. However, it also tolerates a wide range of soils found in most parts of the country.

Undulating landscape. This allows for the use of machines. A good example is the topography of Trans Nzoia and Uasin Gishu Districts which has facilitated large scale maize production.

Plough early during the sunny season, give two or three ploughing if necessary to get good clean seedbed, and remove couch – grass with.

It is essential to plant early, at the onset of the rains. Yields are greatly reduced by late planting.

It is important to choose the correct hybrid for your altitude and rainfall conditions.

Plant either 2 seeds per hole or 1 and 2 seeds alternately per hole, and then single to 1 plant per hole when the maize is 6-9 inches tall, leave 2 plants at one side of a gap. The seed should not be planted directly in contact with fertilizers, as this can cause poor germination due to seed scorching. When hand-planting, put fertilizer in the hole, stir with a stick to mix the fertilizer with the soil, then put the seed. Cover the seed with loose soil, then press down the soil.

Keep the maize clean weeded until it flowers, by weeding several times.

The most common maize diseases include:-

The disease occurs at all stages of crop. The main symptoms include the appearance of chlorotic mottling on leaves which starts from the base and extends upwards. Also, the leaves show necrosis at margins which later extends to midrib and results in drying of the entire leaf.

Downy Mildew disease
The disease appears as early from two weeks after sowing resulting in chlorosis and stunting. In older plants, the leaves show mottling, chlorotic streaking and lesions, and white striped leaves. Usually, the leaves are narrower and more erect when compare to healthy plants and are covered with a white, downy growth on both surfaces.
Control: Grow available resistant varieties and hybrids. Follow crop rotation with non-host crops. Use suitable systemic fungicide for both seed treatment and foliar spray. Keep the fields free from weeds. Drying seeds before sowing reduces the disease incidence.

It appears as water-soaked linear lesions on leaves as they emerge; lesions turn brown and may subsequently turn gray or white; lesions may have a red border; after the leaves are mature, lesions do not tend to extend any further; no new lesions tend to appear after tasseling; if corn variety is susceptible, mature leaves may shred after maturity

Control: Resistant hybrids should be planted in areas where the disease is prevalent; plowing crop debris into the soil and rotating crop may not be effective at controlling the disease due to its extensive host range

The most common maize pests include:-

Aphids
Heavy infestations of aphids can result in curled leaves and stunted plants; honeydew secretions promote growth of sooty mold. Aphids may transmit viruses when feeding
Control: It is rare for aphids to reach levels that are damaging to the plant and no control is generally warranted as insecticide sprays will not prevent transmission of viruses

Armyworms
Armyworms are leaf-eating caterpillar pests of many crops. They usually feed heavily leaving only stems and mid-rib of leaves.

Control: Organic methods of controlling the armyworm include biological control by natural enemies which parasitize the larvae and the application of Bacillus thuringiensis; there are chemicals available for commercial control.
Cutworms
They attack the stems of young transplants or seedlings.
Control: Remove all plant residue from the soil after harvest or at least two weeks before planting and apply appropriate insecticides to infested areas of garden or field if not growing organically.

Maize is harvested in the dry season to avoid incidents of grain rotting in the field. On small farms, the maize is left to dry while on the stalks. The cobs are then removed from their husks by hand and taken to the stores.

Maize is periodically dried in the sun until the grains are completely dry. On large farms, the plants are cut and piled in several places in the ﬁeld in straight heaps. This enables the grains to dry for some period. The cobs are then removed and shelling done usually by machines. The grain is winnowed and packed in sacks.

Maize for the green market is ready for harvest when the grain hardens or when the silky flowering at the top of the maize cob turns black.

1. Most leaves have dried up
2.  Cob husks are no longer green
3.  Stalks turn yellow or brown
4.  Cobs begin to droop on the stalk (figure 1)
5.  Kernels show a black layer between the seed and point of attachment to the cob (figure 1).
6.  Grains are hard and not milky
7.  Cobs are no longer good for roasting

Preparations for the harvest

The old harvest can be stored in a separate place for consumption. In addition, good hygiene should be ensured to prevent postharvest losses, the new harvest should never be placed on, or with, grain from the previous season as this will encourage the movement of pests from the old to the new.

Harvesting of maize  is done by hands for small-scale maize farming in Kenya. Maize stalks are cut using sickle and machete (panga) and stooked on farm , or carried to the storage area.

Stooking has the following enables the maize to dry in the farm and thus allowing farmers to have enough time to prepare the stores. It is also easier to pick cobs from one spot and dehulling the maize on the farm.

After harvest, maize may be transported from the farm to the homestead by any of the following methods: Head loads, Bicycle and motorbikes (boda boda), Oxen carts, Pick-up trucks and, tractors and lorries. Farmers are encouraged to use methods which do not cause damage (bruising, cracking or breakage) or loss through spillage.

Drying of maize on cobs

After harvesting, the maize must be dried before threshing and storage. Proper drying of maize enables grains to be stored for long and reduces conditions favourable for pest and mould infestation by lowering the moisture content. Drying should be done by spreading the cobs on mats, tarpaulins or in cribs. When drying maize at the homestead, it should not be placed in direct contact with the soil and should be kept away from farm animals, or else the grain may be damaged or eaten.  Maize cobs may be dried either with or without the husk cover.

Bagged maize is transported to the millers. It is weighed and put on trays. It is then sieved to remove any undesired matter, e.g. tiny rock particles and broken cobs. It is then passed through a milling machine which crushes it into ﬂour of various grades.

Maize in Kenya is mainly sold to the National Cereals and Produce Board (NCPB). The farmers also sell directly to the millers who are located in major towns of Nairobi, Kisumu, Nakuru, and Kitale.

Major effort must be made to transfer modern technology through education, training and raising the levels of knowledge of the smallholder farmers. Most Kenya maize farmers should be involved in the development of new research packages since they usually understand better the possible impacts of new technologies on their farming systems.

How will Maize Farming In Kenya benefit farmers?

To farmers Maize Farming in Kenya, it is the single most extensively grown crop in Kenya. It is the staple food for more than 80 per cent of the population. Its average per capital consumption is 103kg per person, relished by both the rich and the poor alike. It accounts for 3 per cent of Kenya’s GDP. With these famers benefits hugely with from their sale.

How much will Maize Farming In Kenya cost?

As per Tegemeo Institute, an agricultural research extension of Egerton University, producing a bag of dry maize costs Sh2,000 translating to about Sh60,000 per acre. The average cost of production for smallscale farmers per acre is Sh1, 600 according to Tegemeo Institute.

What problem is Maize Farming In Kenya solving?

Maize is by far the most important food crop in Kenya, playing an integral role in national food security.

What are most common maize pests in Kenya?

Maize farmer in Kenya endures hard times when thier farms gets attacked by pest. Thesse pest causes a huge destruction on the firm and by that reason famers are advised to be well versed with pesticides and control measures when their farms are attacked by these pests, they include Aphids
Armyworms and Cutworms.

What are the impacts of technology to Maize Farming In Kenya?

Given that a large majority of smallholder farmers grow maize, getting farmers to grow varieties that are suited to their environments is a key strategy. For example, popular maize varieties were released in the 1980s despite the fact that almost 200 maize varieties have entered the market since 2000.